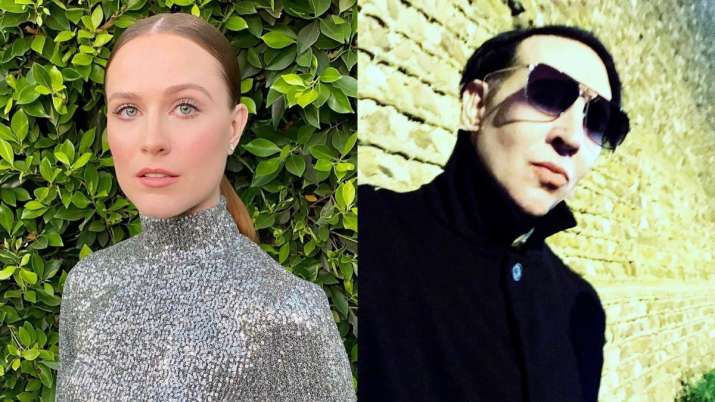 American actor and musician Evan Rachel Wood has accused Marilyn Manson of raping her on the set of the music video for his 2007 single ‘Heart-Shaped Glasses’. According to Fox News, the claim was made in a new documentary titled ‘Phoenix Rising’ that focuses on her life and career. It premiered during the 2022 Sundance Film Festival. In it, the 34-year-old alleged that during a previously discussed “simulated sex scene,” the rocker “started penetrating me for real,” once the cameras were rolling. “I had never agreed to that,” said Wood.

As per the star, she was fed absinthe on the set of the video where she played a Lolita-styled character. Wood also said she was barely conscious to object to the 53-year-old’s alleged actions. “[I had] never been on a set that unprofessional in my life up until this day. It was complete chaos and I did not feel safe. No one was looking after me,” said Wood. Wood said she didn’t know how to advocate for herself or say no “because I had been conditioned and trained to never talk back, to just soldier through.” She claimed the crew “was very uncomfortable and nobody knew what to do.”

Wood said the alleged incident made her feel “disgusted and like I had done something shameful.” “I was coerced into a commercial sex act under false pretenses. That’s when the first crime was committed against me and I was essentially raped on camera,” she said.

According to the outlet, Wood said her ex-fiance gave her “really clear” instructions on how she was supposed to describe the video to journalists. But Manson teased the press with the notion that there was truth to the music video’s “realism.”

“I was supposed to tell people we had this great, romantic time and none of that was the truth. But I was scared to do anything that would upset Brian in any way. The video was just the beginning of the violence that would keep escalating over the course of the relationship,” said Wood.

Wood and Manson’s relationship became public in 2007 when he was 38 and she was 19. They were briefly engaged in 2010 before breaking up. In 2021, Wood publicly accused Manson of abuse, alleging she was “manipulated into submission” during their relationship. She previously spoke out about being abused in a relationship but didn’t name the person until she detailed the allegations on Instagram.

“The name of my abuser is Brian Warner, also known to the world as Marilyn Manson. He started grooming me when I was a teenager and horrifically abused me for years,” Wood said. “I am done living in fear of retaliation, slander, or blackmail. I am here to expose this dangerous man and call out the many industries that have enabled him, before he ruins any more lives,” the post shared.

She concluded, “I stand with the many victims who will no longer be silent.” Wood is among several women, including ‘Game of Thrones’ actor Esme Bianco, who has accused Manson of sexual and physical violence involving torture. Manson has denied Wood’s allegations as “horrible distortions of reality.” He responded to Wood’s allegations with his own Instagram post the same day as hers.

“My intimate relationships have always been entirely consensual with like-minded partners. Regardless of how — and why — others are now choosing to misrepresent the past, that is the truth,” his post said. As per Fox News, Manson’s label, Loma Vista Recordings, said in a statement that after the “disturbing allegations,” it will “cease to further promote his current album” and has “also decided not to work with Marilyn Manson on any future projects.”